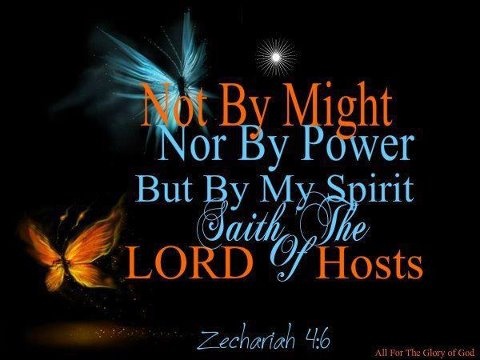 Zechariah 4:6 So he answered and said to me: "This is the word of the Lord to Zerubbabel: 'Not by might nor by power, but by My Spirit,' Says the Lord of hosts.

There was a time in Israelite history when the Babylonians captured them, took them from Jerusalem, and completely demolished the Temple. For seventy years the Israelites were held in captivity until at last God whispered into the hearts of a few that it was time to return.

A man named Zerubbabel, head of the tribe of Judah, was one of the groups who returned to Jerusalem to find a mountain of rubble that was once their temple. After two years, the debris had finally been cleared and the foundation had been laid. But great opposition from the Samaritans caused a 16 year delay in the construction of the Temple. Their food was stolen, they were threatened. Discouragement set in.

This is almost always the case as we apply this story to our own lives. God may whisper a dream, a vision, a nudge into our hearts and we set off with this wonderful idea. But it takes little time before the opposition confronts us. Well meaning friends tell us that we can’t do it, we don’t have the credentials, the skills, the connections, the resources.

I once read that if you put one crab in a bucket, it will quickly escape. But if you put two or three crabs in the bucket the others will always pull the one trying to escape back in, so they all remain captured. On our journey to do God’s work there will be those people who make fun of us, impede our progress and try to keep us in the bucket with them.

This is part of what Zerubbabel faced. He also faced personal distractions, and discouragement redirected his attention away from the Temple. This is the insidious of discouragement: it diverts our attention, dampens our will, and blinds us to our original vision. But God sent the prophet Zechariah to Zerubbabel, to give him this message: “The Temple will be built, not by your power nor by your might, but by My Spirit.”

After hearing this message Zerubbabel renewed his energies and focus and completed the Temple. The message became clear: the Temple would not be built by might - all the material resources available to him: the wealth, the weapons, the technology, and all the stockpile of experience that he thought would move him forward. The Temple would not be built by power – his human strength, skills, and abilities. It would be built by God’s Spirit. Period.

This is a lesson that we all continue to struggle with on a daily basis. We hold dear to us ideas, thought patterns, habitual ways of thinking and reacting. We want to do things our way; we think we know best – and with God’s help and subtle influence and guidance, we can do great things. But without God we are pretty much inept. We are told in Ephesians 6:10 “Be strong in the Lord, and in the power of His might.” We are strong through God’s Might, through God’s resources, not ours.

God’s message to Zerubbabel continues. He said in Zecharia 4:7 “Who are you, O great mountain? Before Zerubbabel you shall become a plain!” There were no mountains around Jerusalem, only a hill with rubble. The word ‘mountain’ here has multiple meanings. It could refer to those who opposed the building of the temple, as Sanballat of Samaria, or the Persian monarchy, and Babylon the capital of it. Mountain could also mean any enemy of the church and people of God whether worldly, emotionally, physically, mentally, as well as spiritually.

The meaning for me is that through our ego, negativity, and lower thinking we can create a mountain out of a hill. We can make things worse with our thinking and attitude. We can create obstacles and opposition and challenges where none existed.

We can cling to our old way of reacting and thinking or we can embrace our “Zerubbabel thinking”, open our hearts to the presence, peace, and Spirit of God and level the mountains that we have created in our minds. The Spirit of God embodies Love. Love is not weak; love is powerful, Love is mighty.

This is a far reaching message, applicable to many areas of life. For instance, I read some research on addiction and how we still cling to our old thinking about this disability. In the 70’s a study showed that if you put a lone rat in a cage with two water bottles in it – one with clean pure water and the other with cocaine in it – the rat will invariably drink from the drug infused bottle until it dies.

Psychologist Bruce Alexander looked at that study and said “Well, that is with one lone rat. What if there was a family of rats and some interesting things for rats to do?” His hypothesis was that drugs do not cause addiction in rats, but the apparent addictive quality was attributable to their living environment and not to the drugs themselves.

So this researcher built a Rat Park: with balls, wheels, and tunnels, and other rats so they could interact and mate, play, and engage in normal rat activities. The experiment concluded with the rats hardly ever drinking from the drug-laden water bottle. Where there were relationships and connection with life, there was less drug abuse.

The newest research in addiction suggests that instead of punishing and shaming the addict, treating them with disdain and as second class citizens, depriving them from re-entering society after a prison stay, and creating barriers and obstacles for them in gaining work and reattaching socially, this new research suggests that we make every attempt to help the addict reconnect.

In 2000, Portugal had one of the worst drug records in the world. Nearly 1% of the population was addicted to heroin. They tried the American solution by punishing, shaming, and alienating the addicts and the situation got increasingly worse.

In 2001 the Prime Minister set us a committee to establish an effective way of meeting this problem. It was decided to decriminalize all drugs, and take the money that was used for punishing, alienating, and cutting them off and instead spend it on reconnecting them with society. They created a massive jobs program and gave micro-loans for addicts to start their own small businesses. This program would pay half the wages for an addict for a year. The goal was to provide every addict in Portugal with a purpose and reason to face life.

After 15 years, the results are in: injecting drug uses in Portugal is down 50%. Drug related deaths have declined from one a day to 30 for all of 2016. For 2017, Portugal’s drug-induced deathrate was 5.5 times lower than the European average and 50 times lower than the United States in the same year. Overdoses and HIV are down enormously, other related addictions are down. No one in Portugal wants to go back to what it was. It is not just the decriminalization of the drugs that is the determining factor in this national experiment – it is changing the mindset of how to think about and treat the addicts.

Sadly, in our country, we still rely on repression and criminalization for pursuing the drug problem. It is the human equivalent of “might and power” that we treat the addict with contempt, There is even a television show about intervention that illustrates how many of us think: if you don’t change your behavior, we will cut you off from the relationships that you have right now. And deathrates continue to rise. 68,500 lives were lost to drugs in 2018.

We want to control other peoples’ behavior; we want to do it our way. But the solution is not might and power; it is by God’s Spirit. The solution is to love the addict; help them grow their emotional, social, spiritual, and business connections. Help them build relationships. We have an innate need to bond; if we do not cling to people, we will cling to drugs, alcohol, pornography, gambling, shopping, or smartphones. In his book Chasing the Scream: The First And Last Days of the War on Drugs, British author Johan Hari states: The opposite of addiction is not sobriety; it is human connection.

Love each other – with or without an addiction. Isn’t that what the Christ asks of us? Love each other as I have loved you. Patrick, don’t just love the normal, healthy, socially well adjusted and successful people; love all people despite their challenges and differences and weaknesses and habits. After all, is there a better way to live?

As we release our societal mindset of “might and power” and embrace God’s Spirit and what the power of Love can do at all the various levels of society and thought, I believe we will see gradual but measurable improvements in all of our human challenges. I believe that as we embrace trust in God, we will learn to trust each other and ourselves. As we accept the movement of Spirit through our minds and hearts, we will gain access to the persevering and transformative might and power of God’s Love. And is there a better way to live?

My prayer is that we first begin this process with ourselves. Let us release our habit of control and invite Spirit into the equation. Let us lay our difficulties before Christ and take our decision-making process into prayer. We will succeed in overcoming our personal challenges, not through our own might and power, but through the might and power of Love – through Spirit. That is how we will accomplish all that God wants us to accomplish as an individual, as a Child of God, as a society and as a species.

Not by might, not by power, but by My Spirit, says our God. Is there a better way to live?

Love I All that Matters